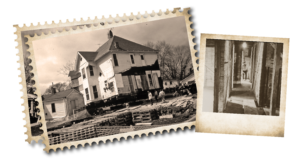 A Traditional Favorite of Bloomington’s Past and Present

The Ziegler House was built in 1883 by William Rogers, Dean of the Indiana University School of Law. The house is entrenched in Bloomington’s history, as it was later owned by William Graham, builder of the Graham Hotel, and then William N. Showers, owner of Showers Brothers Furniture Factory.

By the 1990s, the Ziegler House served as a 7-apartment student rental house that was once located behind the First Presbyterian Church. Bloomington Restorations approached Bill and Gayle Cook, founders of Cook Medical and CFC Properties, when many feared the house might be torn down because the church needed additional space.

The Cook family agreed to save the house, purchased it for $1, and moved it two and a half blocks east to its current location 310 N. Grant Street, Bloomington IN. The Ziegler House underwent renovation and was connected to the Gilstrap House where the dining room is now located. 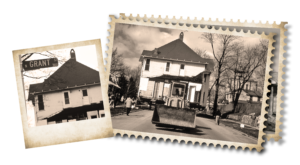 Behind the front door of the Ziegler House, where the registration/welcome desk is located, the 1880s Victorian springs to life. The original parquet hardwood floor remains, along with two pocket doors that now serve as floor-to-ceiling headboards in room 23 and 26. The original trim, rosettes, stair rail, and wrap around porch remain, as well. And more recently, just left of the mosaic fireplace in the lobby is a photograph of Danny Glover, an actor who starred in The Good Catholic, who stayed in the Inn while filming nearby in early 2016.

Following Grant Street Inn’s successful opening in 1991 with 14 rooms, nearby structures, today known as The Annex and Buttercup Cottage were converted from apartments to additional guest rooms increasing the room count to 24.

Paul Wagoner, Grant Street Inn’s 15-year Manager, often says, “We are a true representation of Bloomington deeply rooted in the community.” Many come for the nostalgic experience; an IU Alumnus looking to reminisce their old stomping ground, IU parents looking to visit their student on campus, couples and/or business commuters who enjoy strolling 4thStreet’s ethnic restaurant scene, or the Kirkwood Avenue and downtown boutique shops or holiday ambiance, while others claim it’s a ‘home away from home’ that triggers a childhood memory or two. 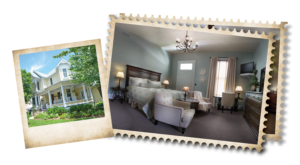 The Grant Street Inn is a completely unique experience – 5 buildings with 40 different rooms offering 40 different experiences. The rooms range in style from victorian-chic to modern, old-world elegance – no two are alike. Guests enjoy discovering their favorite room and/or building. Even when faced with a number of new and flashy chain developments in the area, the Grant Street Inn remains a highly sought-after destination because it’s a traditional favorite of Bloomington’s past and present time. Once you come, you’ll never want to leave.